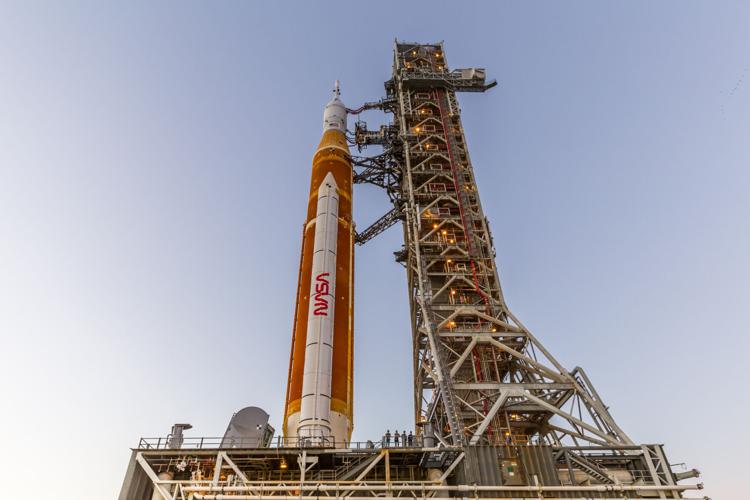 SLS rolls to the launch pad. 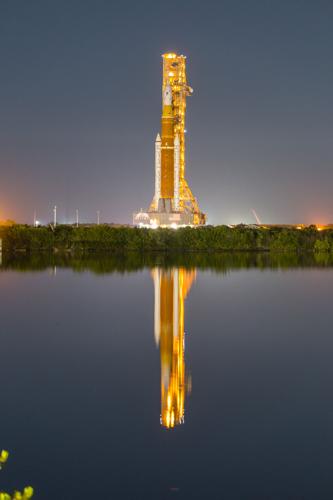 SLS reflects over the Turn Basin during rollout. 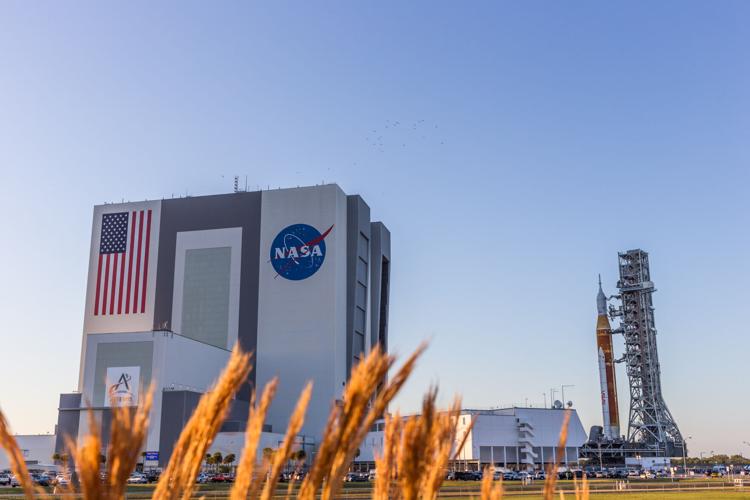 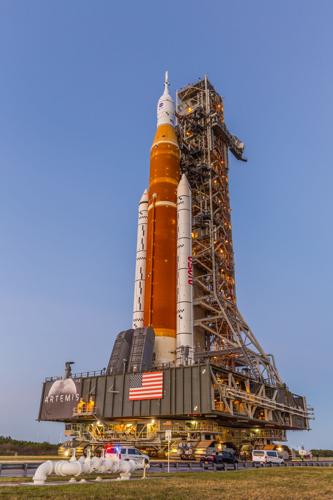 SLS rolls to the launch pad.

NASA’s mammoth moon rocket rolled to the launch pad Thursday, Mar 17, setting the stage for a final round of testing before the maiden flight this summer.

The 322 foot Space Launch System rocket towered over the crawler way, formerly used by the Space Shuttle and Apollo moon missions, after lumbering away from the cavernous Vehicle Assembly Building near sunset. The last rocket to exit the iconic building was Space Shuttle Atlantis, just prior to the Space Shuttle Program’s final launch in 2011.

SLS is the latest generation of super heavy lift rockets, designed to launch humans to the moon as a part of NASA’s Artemis Program. Artemis, the successor to Apollo, entails a series of landmark missions, leading to landing humans on the moon, for the first time in over 50 years.

“From this sacred and historical place, humanity will soon embark on a new era of exploration,” NASA administrator Bill Nelson said. “Artemis I will demonstrate NASA’s commitment and capacity to extend humanity’s presence on the Moon – and beyond.”

However, before humans can return to the moon, the rocket must be tested. That is where Thursday’s milestone leads, with SLS rolling to Launch Complex 39B for the first time, in preparation for its Wet Dress Rehearsal.

The so-called WDR is a high-fidelity countdown simulation, involving the loading of supercooled cryogenic propellants, and testing up until just prior to engine ignition. In addition, the WDR will verify the ground-based systems, including the launchpad, and ensures the integrated system interacts well together.

“Now at the pad for the first time, we will use the integrated systems to practice the launch countdown and load the rocket with the propellants it needs to send Orion on a lunar journey in preparation for launch,” Tom Whitmeyer, NASA deputy associate administrator for Common Exploration Systems Development, said.

The WDR test is planned to occur in early April, according to NASA. After the conclusion of the WDR, the SLS rocket will return to the VAB, a lengthy journey of over 11 hours. Even though the launchpad is only 4 miles away, the specially designed crawler moves at glacial speeds.

According to NASA, the crawler can achieve a top speed of one mph, but moves far slower with the fully stacked SLS rocket. In fact, the crawler burns 165 gallons per mile, or approximately 0.006 miles per gallon, according to a NASA fact sheet.

The last time a rocket this size rolled out of the Vehicle Assembly Building was in 1973, when the final Saturn V moon rocket moved to the launchpad with the Skylab space station. The rollout, and unveiling of the SLS rocket is a culmination of over a decade of complex engineering the space agency conducted, paving a way after the end of the Space Shuttle. The SLS rocket design was first announced by NASA in 2011, just months after Space Shuttle Atlantis landed for the final time.

Despite the retirement of the Space Shuttle in 2011, SLS incorporates a significant amount of heritage from NASA’s mainstay launcher. In fact, the engines on the first SLS have already been flown on multiple Space Shuttle missions, along with the solid rocket boosters. The same crawlers also transported the Space Shuttle and Apollo Saturn V rockets, according to NASA, with over 50 years of service to date.

“The Space Launch System was the first big rocket to undergo the design and review process since the shuttle days,” John Honeycutt, SLS program manager at NASA, said.

Honeycutt also recounted the experience of designing the new rocket, with all of the new players involved. Despite proven Space Shuttle hardware, he described the challenges related to the new mission set beyond Earth this new rocket will take advantage of.

NASA hopes to launch this SLS rocket, on the Artemis I mission, sometime this summer, followed by a multi-week shakedown of the human-rated Orion spacecraft in orbit around the moon. The ultimate launch date, however, is contingent on results of the WDR.