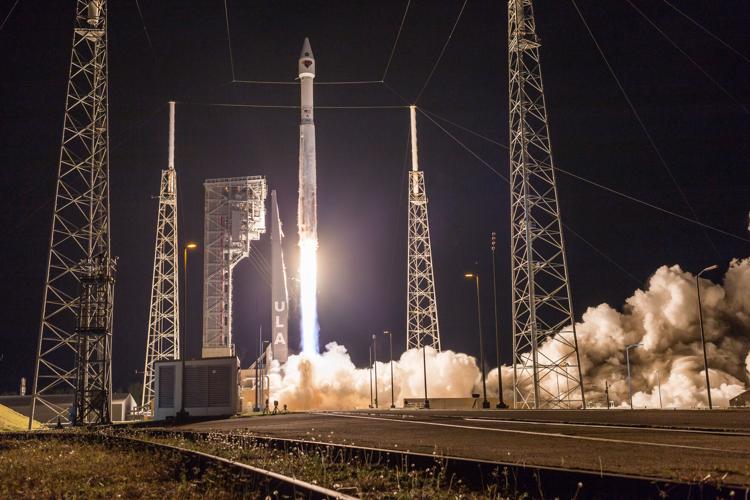 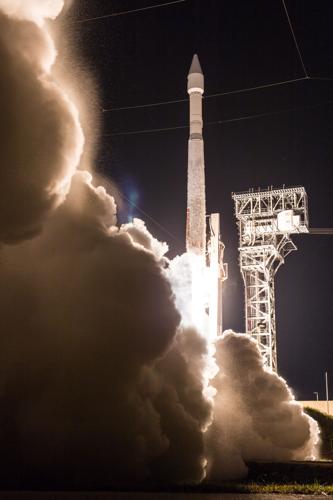 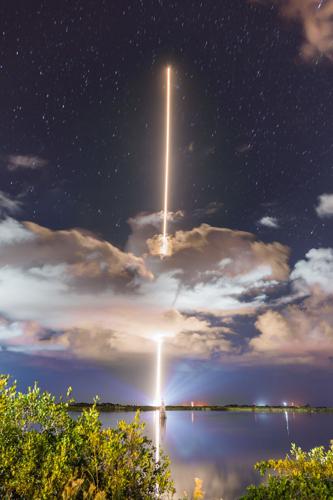 At 5:34 a.m. EST, the venerable United Launch Alliance Atlas V rocket rose off a pillar of flame, seizing on the opening second of a 23 day, once-in-a-lifetime, window for the Lucy spacecraft to rendezvous with at least 8 asteroids. Most of their orbits are influenced by the super-massive gas giant planet Jupiter.

The launch pad of Saturday’s Atlas launch reached a special milestone – its 100th launch. Since the pad’s first launch in 1965, groundbreaking science missions, including the first spacecraft to leave the solar system, sun explorers, two Mars rovers, a probe to visit Pluto, and more, have all started their missions at Space Launch Complex 41. Lucy will continue to add to SLC-41’s long and historic resume of planetary exploration.

NASA’s Lucy mission seeks to understand the building blocks of the early formation of our heliocentric system. Seven of the targeted asteroids are located in the “Trojan Belt,” a group of asteroids that follow the orbit of Jupiter. Planetary scientists believe that these unique asteroids equate to a time capsule of our solar system, as they are remnants of its formation, according to a NASA fact sheet regarding the mission.

Lucy’s primary mission is planned to last 12 years, with close flybys of 8 primary targets. However, Lucy will be placed into a stable orbit that could last millions of years, allowing the spacecraft to continuously revisit the Trojan Belt. Scientists will be able to collect data for as long as the spacecraft continues to function. Additional flybys are also possible after the primary mission is complete, but will be driven by the amount of remaining propellant and detection of asteroids in reasonable proximity, according to a press kit on the Lucy mission.

The ability of additional flybys is dependent on the Atlas V rocket’s performance on launch day. The Atlas V is the workhorse of NASA exploration for a multitude of reasons, but has been known to place satellites in extremely accurate orbits, leaving the spacecraft with additional fuel and years of additional lifespan.

“Orbit insertion by the [United Launch Alliance] #AtlasV was extremely precise, and as a result #Landsat 9 currently has fuel beyond the 10-year mission requirement,” according to a tweet by NASA’s Landsat Program. Landsat 9 launched on a similar Atlas V rocket last month from the Vandenberg Space Force Base, in California.

Shortly following the launch, it became apparent to ground controllers that one of the two electricity-generating solar arrays did not deploy fully, according to a NASA blog. While experts are confident the situation can be resolved, the spacecraft team has additional time to resolve the issue, thanks to the accuracy provided by the Atlas V rocket, hallmarking a feature that has cemented the rocket’s reputation for interplanetary space launch.

“The ULA Atlas V rocket delivered Lucy precisely to the target point at separation, and so a backup maneuver called the Trajectory Correction Maneuver (TCM-1) is unnecessary and has therefore been canceled,” according to a NASA blog. “The first maneuver will now be what’s known as TCM-2, currently scheduled for mid-December.”

Lucy marked the 146th launch for Atlas manufacturer ULA, with 100% mission success, and the 89th launch of the Atlas V rocket, according to a post-launch press release distributed by ULA. ULA has one launch remaining this year, from Cape Canaveral. Designated STP-3, the most powerful Atlas V configuration will launch a group of payloads and experiments for the U.S. Space Force.

According to a press kit issued by ULA, “STP-3 is a co-manifested mission that matures technology and reduces future space program risk for the Department of the Air Force and the U.S. Space Force by advancing warfighting capabilities in the areas of nuclear detonation detection, space domain awareness (SDA), weather, and communication.”

Less than 30 of the workhorse Atlas V rockets remain before the fleet’s retirement in the next few years. Between launch campaigns at the historic SLC-41 launch pad, ULA has been testing their next generation rocket, Vulcan Centaur, which will enable the future of NASA’s planetary exploration, amongst other missions.

The pathfinder vehicle, named PTT, completed fueling tests successfully just a week prior to Lucy’s launch, according to a ULA blog. The inaugural flight of this new rocket is scheduled from Cape Canaveral sometime next year, carrying on the storied legacy of the Atlas V and Delta IV rocket families.

, no doubt new methods of returning space vehicles will continue to lower cost