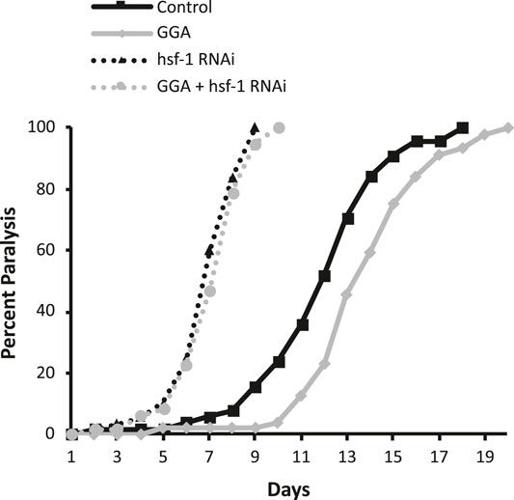 Data showing that paralysis was reduced in C. elegans that were exposed to GGA.

Eric Guisbert’s research lab has been studying the effects of a molecule called geranylgeranylacetone (GGA), on the heat shock response pathway in Caenorhabditis elegans, a roundworm often used as a model system in genetic research.

Today, the lab had a paper published on their experiments shedding light on the molecule and future implications.

When activated, the heat shock response pathway shows how cells respond to temperature stress. More recently, the pathway has been further studied and proven to have links to neurodegenerative diseases.

A leading factor in these diseases is protein misfolding and the heat shock response pathway helps proteins to fold better.

“If we can activate the pathway, we can potentially treat people who have Alzheimer’s and other neurodegenerative diseases,” Guisbert said.

According to Guisbert, the lab studies C. elegans because of its simplicity. He explained “if you want to understand how machines can fly, you don’t start with the space shuttle, which is very complex, you might start looking at a glider.”

In applying the analogy to diseases, the human body is the space shuttle and C. elegans is the glider. He explained that the number of genes in these worms and humans is almost identical, so the pathways and genes identified in C. elegans can directly correspond to human genes and pathways.

The roundworms have less than 1,000 total cells while humans have trillions of cells.

“It's a stripped down simple system that we can understand on a much deeper level,” Guisbert said.

The heat shock response pathway activates a gene called HSF1 Guisbert said. It’s a transcription factor, meaning that it binds to DNA and turns the gene on. When activated, proteins are assisted in folding better, but when there’s temperature stress, the proteins don’t fold as well.

In neurodegenerative diseases, this pathway may not be activated at all or has trouble responding, Guisbert explained.

GGA is a molecule that activates the heat shock response pathway. Evidence suggests that activating the pathway is beneficial in preventing aging and neurodegeneration. Guisbert’s lab has applied this molecule in C. elegans to test:

In the research lab, they found that GGA activates the pathway, has a beneficial effect on Alzheimer’s disease on a worm model and that it extends the lifespan.

“No one had known the lifespan part before,” Guisbert said.

Guisbert explained that the initial interest in GGA for his research got brought to his attention in the developmental biology lab class at Florida Tech. Students would test different drugs on C. elegans to see if it affected the lifespan.

Through findings in the lab section, more detailed experiments were conducted in the research lab, mostly by undergraduate students.

Isiah Mossiah recently graduated and worked in the lab. “We were working on the Alzheimer's side of it, and then also making sure that GGA caused an increase in the heat shock proteins,” Mossiah said.

Mossiah explained that in Alzheimer’s, there’s an issue with the heat shock proteins which additionally affects the lifespan.

Sabrina Perez is a previous student who also worked in the lab with Mossiah and has recently graduated. She looked at the effects of GGA on amyloid-beta, a main component of Alzheimer’s disease.

“I saw that this reduced the paralysis in this strain of worms, meaning that it kind of alleviated the effects of the A beta,” Perez said.

Perez and Mossiah presented their work at the Northrop Grumman showcase in 2019 where they were awarded with the Social Impact Award.

Taylor Stanley, a PhD student, and Michaela Foley, a graduate student, have both conducted additional experiments in the lab so that the research was ready for publication.

Guisbert said that Stanley had strictly tested the anti-aging drug on adult C. elegans and Foley conducted further experiments that Mossiah had previously worked on.

With this publication, Guisbert hopes that it will motivate further experimentation in other organisms such as mice.

“If it extends lifespan in mice, that would be even more exciting… those beneficial effects could translate to humans,” Guisbert said.